This beautiful balloon was calling to me, “Take my picture! Take my picture!” Floating in front of King Arthur Carrousel  in Disneyland, I just love how you see the reflection of Fantasyland in the ears. It just seems so peaceful and I hope it gives you a nice feeling, too.

Playing around with my new Sony RX1R II camera, I took this photo inside “it’s a small world” at Disneyland. (Amazing how little noise there is a for a pretty high ISO.) 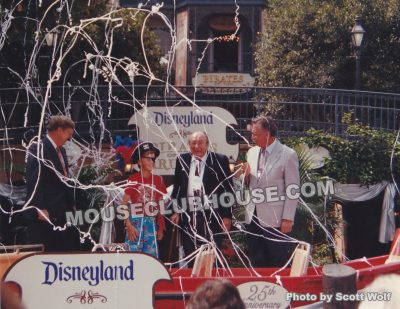 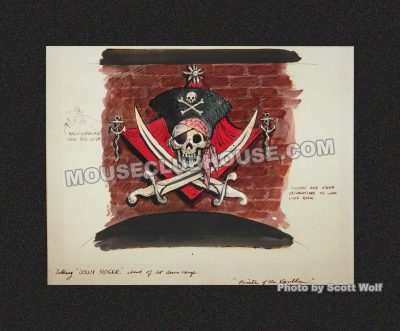 I just posted my interview with Disneyland entertainers Jim Adams and Don Payne, who during the 1970s were involved in performing, writing and directing shows for Disneyland an on tour across the country for Disney.  CLICK HERE for interview and more photos

I’ve had many wonderful memories of the Disney characters since that old wolf scared the heck out of me, and into my adulthood I have never stopped getting that special feeling about the characters. I’ve witnessed grown adults crying tears of joy when meeting them, and I have heard extraordinary stories firsthand of how the Disney characters have touched people’s lives.

It remains exciting for me to see the characters in different situations. When I was working on a project for Disney back in the ’90s, I obtained a list of what’s called “overdressings” for Mickey. It’s Mickey’s special wardrobe besides his usual outfit. There was Mickey’s space outfit, Mickey’s patriotic outfit, a cowboy outfit, raincoat and hat, and hundreds of others. I feel these outfits bring new dimension, versatility and freshness to the characters.

Seeing the Disney characters in the “real world,” is also a special experience. The first time I saw Mickey Mouse outside of Disneyland was in 1988 when I was working at the Disney Studios, and Mickey visited the lot for his 60th birthday celebration. It’s a different feeling when he steps out of his world and into yours, making everything that much more believable. They had a photo location for employees to get a Polaroid photo with the birthday boy. There was a long line, and it was all adults waiting to snap a special moment!  There was certainly no doubt that  Mickey and his friends were not just for kids.

One place that you can meet the Disney characters away from the resorts is on a Disney Cruise! Yes, those characters get around! It’s great to travel to an island in the Bahamas, but even more memorable to disembark and see Captain Hook and Mr. Smee, from “Peter Pan”, with the beautiful tropical backdrop! (You can see my photo of the duo on Disney’s private island, Castaway Cay here). Above is a photo I took of Minnie Mouse on Castaway Cay, with the Disney Dream cruise ship behind her.

There are two stories in particular that come to mind whenever I think of the impact of the Disney characters.

The 1977 Disneyland Ambassador to the World, Susan Donald Edwards  told me her memories of when she visited a children’s hospital with Mickey. A child who had been stricken with cancer talked to Mickey and the nurses seemed stunned. They were literally in tears. It wasn’t until after the meeting that Susan learned the child had not spoken for two weeks.

A similar story to Susan, the 1974 Disneyland Ambassador to the World, Carol DeKeyser Masters told me of when she visited a children’s hospital with Mickey Mouse. A little boy who had suffered a brain injury from a car accident had not spoken for over two years, and the specialists were trying to determine if he was what they call elective mute or if the brain was just not able to form words. When Carol and Mickey entered the room, the boy said, “Mickey Mouse,” and doctors and nurses fell to their knees crying. Carol did not learn of the situation until after the situation, and then was moved to tears herself.

I believe that these stories really emphasize that the Disney characters are not just special, but that there really is something magical about them.

I just posted my interview with Disney Legend and Imagineer, Orlando Ferrante, who talks about his time coordinating everything from attractions to complete Disney parks, as well as Disney’s participation in the 1964/1965 New York World’s Fair, and the Disney Cruise Line. CLICK HERE for the interview

Thought I’d post these photos I took for Disney 24 years ago at the Tournament of Roses in Pasadena. In addition to this float for the pre-show, Disneyland was also represented in the main parade as well. Standing in the red coat behind Mickey and Minnie below is Kathleen Mitts the 1993 Disneyland Ambassador to the World.
From Shani & I, have a wonderful 2017!!!

Here are a couple photos I took almost a quarter century ago in 1992. The elaborate Very Merry Christmas Parade at Disneyland began with an overture of Disney tunes over the speakers, followed by the live trumpeters. The first half of the parade featured scenes from classic Disney movies, including Snow White, Fantasia, Mary Poppins and others. The second half of the parade featured many of the elements in the current A Christmas Fantasy parade, including the snowmen, skating snowflakes, and of course Santa Claus and his reindeer for the finale.

I just posted my interview with Kathleen Mitts, the 1993 Disneyland Ambassador to the World. In this conversation, Kathleen talks about her exciting year representing Disneyland in this unique role, and how she ended up as part of the Space Mountain attraction. CLICK HERE for the interview and lots of photos.

Please join our Mouse Clubhouse Facebook group and add any friends you know that like Disney! https://www.facebook.com/groups/mouseclubhouse/ 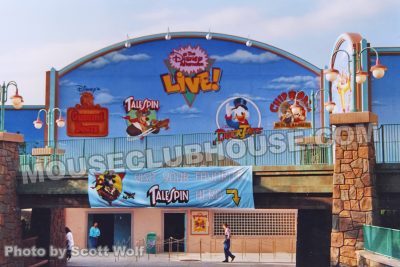 When I became an assistant producer on Disney’s TaleSpin animated television series, I never thought it would end up being a big part of an exciting year at Disneyland in 1991! TaleSpin was part of the very first two-hour Disney animated block on television entitled “The Disney Afternoon” in 1990.

In 1991, the Disney Afternoon Live promotion at Disneyland includes special shows and parades and attractions. I always loved Disneyland, so to have an abundance of TV Animation represented was particularly exciting for me, especially having worked on TaleSpin since the start.

I hope you enjoy some of my happy memories, and feel free to click on any photo to view it larger.